Barcelona battle back to secure a late 1-1 La Liga draw against a dominant Athletic Bilbao.

The Basque giants have been tipped for a European push in 2021/22 and they simply overpowered Ronald Koeman’s side at the start in the Basque Country.

Barcelona’s were up against it right from kick off and their task was made even harder before the break as veteran centre back Gerard Pique was forced off with an injury.

However, despite the visitors almost finding a breakthrough after the restart, as Martin Braithwaite was denied by Julen Agirrezabala, with Pedri’s follow up cleared, the hosts instantly hit back. 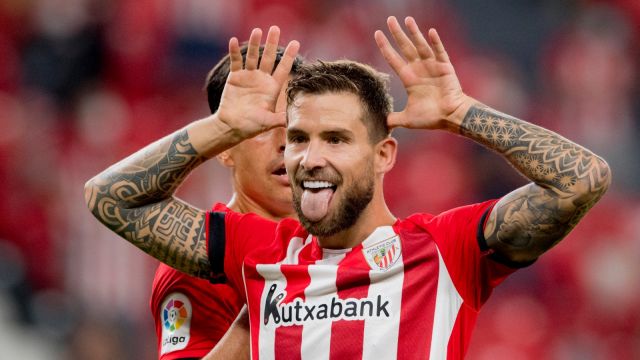 Iker Muniain’s corner evaded the Barcelona defence and Martinez stole across his marker to nod home.

Athletic Club's pressure pays off as they take the lead against Barcelona! 🦁

Íñigo Martínez with a great run to the near post and a brilliant header into the far corner 👏 pic.twitter.com/aWaQbCuxEf

However, despite struggling to make any inroads in the first 70 minutes, Koeman’s side came to life in the closing stages.

Frenkie De Jong came close to conjuring up an equaliser as his flick came back off the post before a moment of Memphis Depay magic rescued a point.

Sergi Roberto’s clever pass released the Dutch international in behind and he took his time before lashing an unstoppable strike beyond Agirrezabala.

SMASHED into the roof of the net for the Barca equaliser 💥 pic.twitter.com/DaqS54yMCW

The night ended on a low point for Barcelona as Eric Garcia was sent off for a late lunge at Nico Williams.

It's a red card for Eric Garcia as he's forced to take Nico Williams down right on the edge of the box! 🟥