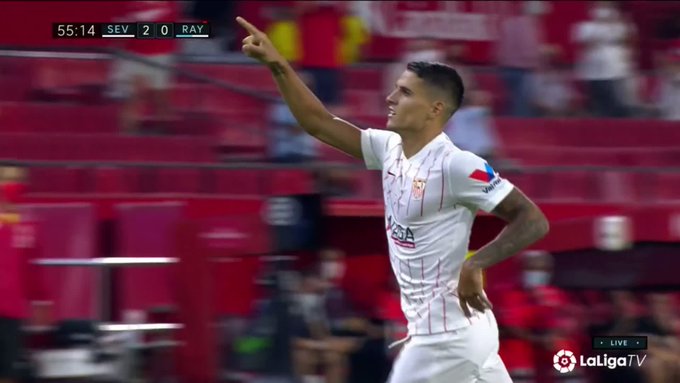 Erik Lamela got his Sevilla and La Liga career off to a fantastic start on Sunday, scoring a brace at the Sanchez-Pizjuan in the Andalusian outfit’s 3-0 defeat of Rayo Vallecano. The Argentine joined Sevilla on a part-exchange with Tottenham Hotspur that saw Bryan Gil head to London, and will be delighted with his bow.

He's only on the pitch a few minutes, but Erik Lamela has made his presence felt in his Sevilla debut! 🔥

It was helped by a big deflection but it's the goal the home side needed to double their lead ⚪🔴 pic.twitter.com/MDovn6dXNr

Rayo, newly-promoted from the Segunda, got off to a good start but were hamstrung early on when goalkeeper Luca Zidane (yes, son of Zinedine) saw red and conceded a penalty in the 16th minute. Youssef En-Nesyri then converted from the spot, before Lamela scored his first and second goals of the evening in the 55th and 79th minutes to complete a comfortable Sevilla win.

There's no taking this one away from Erik Lamela! 🙌

Beyond any doubt, he has a debut goal (or two) for Sevilla ⚪🔴 pic.twitter.com/hbS78mOTXT

Many have tipped Villarreal to put pressure on Sevilla and challenge them for a top four place this season, but they’re forgetting just how competent Julen Lopetegui’s side are. They’re strong and grizzled, and finished 15 points clear of Real Sociedad last term. They’ve ended matchday one in second, just behind Real Madrid, and can dream of an outside title challenge.