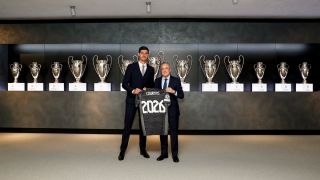 Real Madrid announce Thibaut Courtois has extended his contract to 2026

Real Madrid have announced in a club statement that they’ve extended Thibaut Courtois’ contract until the summer of 2026. The Belgian goalkeeper has become one of the best goalkeepers in the world since trading Stamford Bridge for the Santiago Bernabeu, and will be a key part of the club’s immediate future.

Courtois was born in Bree and came through the youth system at Bilzen VV and then Genk. He broke into the latter’s first-team in 2009, earning a move to Chelsea two years later. He spent seven years with Chelsea before joining Madrid, three of which on loan at Atletico Madrid. He has 89 Belgian caps to his name.