Joan Laporta gave an illuminating press conference on Monday morning detailing the extent of Barcelona’s financial woes and the path the club need to take to resolve them. Laporta was elected at the beginning of this year, taking over from the disgraced Josep Maria Bartomeu, whose ruinous tenure has crippled Barcelona.

Lionel Messi had to leave Camp Nou this summer because the club couldn’t afford to keep him, even when the Argentine offered to cut his salary in half. He’s now joined Paris Saint-Germain alongside Real Madrid’s former captain Sergio Ramos, leaving La Liga light on stars comparative to the last decade. While Madrid have been operating intelligently and prudently during the coronavirus pandemic, however, Barcelona have been a mess.

This has meant that Laporta has been busy since taking over. The decision to let Messi go was tough but necessary, in his eyes, as is the need to coerce some of the squad’s senior players into significant salary reductions. All must be done while keeping Ronald Koeman’s team competitive on the pitch, a delicate balance to strike, indeed. Laporta won’t shy away from any challenge, however. He’ll attack it head-on.

“This press conference is called because I want to put several situations into context and to explain what we have found when we arrived at the club,” Laporta began. “The salary policy that we stumbled upon from the previous board is wrong, it’s what the experts call the inverted pyramid, where veterans have long contracts and young players have short ones, and that makes it very difficult to renegotiate contracts. 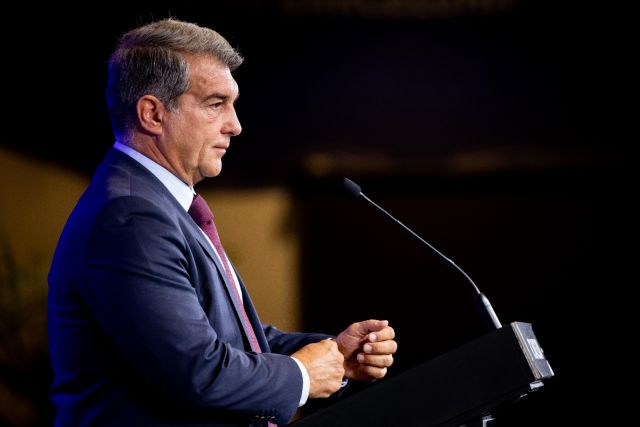 “We have a salary bill that represents 103% of the club’s total income. The previous board had someone to discover talents in South America. He charged €8m, an inappropriate amount. Barcelona have a negative net worth of €451m. The sports payroll is €617m, between 25% and 30% more than our competitors.

“I received the letter from Bartomeu and I see it full of lies. With an effort to justify a management that is unjustifiable. Nor do I share the numbers that Bartomeu is talking about. We absolutely disagree. They are responsible until March 17th, 2021.

“No one will escape their responsibilities. As of today, the debt is €1.35bn. The economic and patrimonial situation is very worrying and the financial situation is dramatic. In Bartomeu’s letter he spoke of another €90m salary cut planned. The truth is that the players didn’t even want to talk to him.”

La Liga recently struck a deal with CVC, an investment fund that would have sold 10% of the league’s television rights for 50 years in exchange for an investment. Barcelona, alongside Madrid, Athletic Bilbao and Real Oviedo, rejected the idea, meaning they retain their rights but pass on any investment. “CVC was to mortgage television rights for half a century, and it is not structured as an income but as a debt,” Laporta said. “The legal structure is not that they make a payment to us, it is like a loan.” 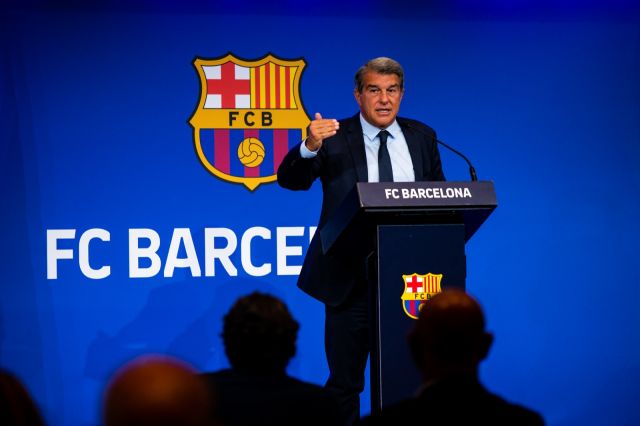 Laporta took care to address each of Bartomeu’s claims head-on. “We have not forgiven Neymar €16m,” he said. “Another lie. What we think is that the best thing was for the two parties to reach an agreement. The sports policy has been disastrous under the previous management. They received €222m for Neymar and they spend it at the speed of light and disproportionately. Now we find ourselves with skyrocketing salaries and amortisations.

“We will look for solutions to clear responsibilities. The situation is dramatic, but we have good news. The strategic plan based on our credibility and experience, on the assets that Barcelona have, makes this situation temporary. The club will always be owned by its members.

“My morale is very high, and even more after seeing the team yesterday, I am convinced that the decisions that should be taken have been made, as in the case of Leo, a sad but necessary decision. If we are all united, the new era that begins will be very successful. The players are committed on and off the pitch. They are very motivated.

“We have eternal gratitude to Messi, it has been a love story and a relationship of many years that has been very successful that sadly has come to an end. It is the law of life. Seeing Messi at PSG gave me very contradictory feelings. I would have preferred to see him at Barcelona, but the club is above everyone.”