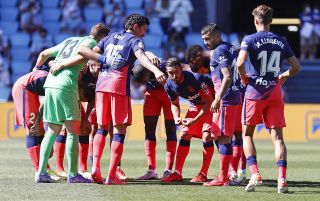 Although most bookmakers still opt for the big two, many seasoned La Liga observers are backing Atletico Madrid to continue their disruption to the duopoly and retain their title. They opened their campaign as defending champions with a 2-1 win over Celta Vigo at Balaidos and demonstrated a number of credentials to support the assertion that they can win again.

Winning back-to-back league titles isn’t the norm for Atletico – they haven’t managed to retain a title since 1950/51 – but Diego Simeone is not your average coach. Over the summer, they have sat back and observed as their rivals have been consumed by emotional departures. Zinedine Zidane left Real Madrid (again), captain Sergio Ramos said his goodbyes and his defensive partner Raphael Varane also left for pastures new. Over in Catalonia at Barcelona, the story of the summer unfolded dramatically as Lionel Messi cried goodbye to the club of his life.

Atletico have kept all of their key players and they have managed to strengthen their squad, too. Rodrigo de Paul is a magnificent creative midfielder who fills an area of the squad in which Atletico were light. Most of their attacks were generated on the flanks, their wing-backs or wide forwards doing most of the work. De Paul offers a central alternative and will help Atletico ask more questions of opposition defences.

This squad depth was emphatically illustrated on Sunday. Already 2-1 up, Simeone made a triple substitution, sending on Luis Suarez, De Paul and Kieran Trippier all at once. An indication of how strongly stacked their squad is, Cholo was laying down a marker to their rivals.

The starting XI in Galicia wasn’t too shabby, either. Marcos Llorente and Angel Correa led the attack and the latter scored both Atletico goals to seal their win. Often overlooked when the question of back-up to Suarez is discussed, Correa proved that he can deliver, carrying his form over from the tail end of last season. Whether or not Rafa Mir or any other forward arrives before the transfer window closes, Correa is one Simeone trusts and knows he can count on.

Saul is a player that seemed destined to leave, but he started the game on the left and played a beautifully incisive pass for the winning goal. When Correa found the back of the net, Saul collapsed onto his knees and pumped his fists in a moment of euphoria. This was not the reaction of a man wanting out.

By the end of this game, your Atletico bingo card would have been well-stamped. Digging in, suffering, close calls, goal-line clearances and the feeling that the opponents let them off the hook (Iago Aspas, how did you not score a second?), Atletico got the job done as they did so often last season. They simply know how to get over the line, however close to the wire they get.

Post-game, Simeone was hugely satisfied and praised the intensity and defensive efforts of his team. He’ll maintain his game-by-game philosophy, and who can argue with the approach that has served him so well? This was a typical Simeone performance to start their title defence, and they look in good shape. Barring any major setbacks, this mentality machine is in pole position to keep on winning and retain that crown. The reigning champions will take some stopping.