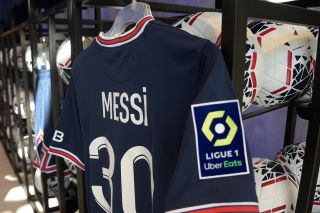 Lionel Messi shirts are already flying off the shelves in Paris following the Argentine star’s arrival.

Messi officially became a PSG player earlier this week after it was confirmed he would not be returning to Barcelona, the club where he spent 21 years.

The veteran forward signed a two-year contract with the French giants, rounding off an impressive front line, along with Kylian Mbappe and Neymar.

The signing of Messi wasn’t totally free, with a large sign-on fee due and a hefty wage, but the Argentine does bring plenty of revenue.

One reason he brings in so much is the demand for shirts with his name on the back.

And after his signing became official, PSG were inundated with orders for new shirts adorned with Messi’s new number 30.

In fact, according to Diario AS, PSG sold more than 150,000 of such shirts in just seven minutes.

And given the cheapest men’s shirt with Messi on the back is €158, that accounts to roughly €23.7million in shirt sales in seven minutes, although the figure will be a little less than that due to discount on women’s and children’s sizes.

PSG don’t receive that money, however.

The French giants have a deal with Nike where they receive €80million upfront each year, rather than the 10-15% of final sales clubs usually receive.

Having said that, due to the signing of Messi, the AS report claims PSG will have discussions with Nike to restructure their deal to reflect the increased income.