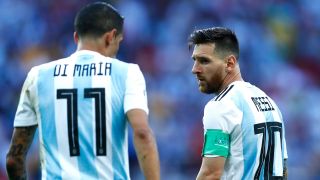 It’s a sight every fan of Spanish football will have found bizarre, and upsetting in many ways. Lionel Messi reported for his first day of training at Paris Saint-Germain today, and was greeted by Sergio Ramos in the gym. The pair shared a hug.

Messi and Ramos both joined PSG on free transfers, having captained Barcelona and Real Madrid, respectively, up until last season. They were arch-enemies during their time at Camp Nou and the Santiago Bernabeu, both embodying the values of each club in opposing ways. Messi represented the purity of beautiful football; Ramos represented the sanctity of winning.

But now they’re together, and it’s a frightening sight for the rest of European football. Ramos is expected to form an indomitable centre-back partnership with Marquinhos, or Presnel Kimpembe if the Brazilian is deployed as a midfielder. Messi will line up beside Neymar and Kylian Mbappe – a madness, as he said himself.

Angel Di Maria: "I'm more than happy. Everything I dreamed about happened in one month: Winning the Copa and being able to play with Leo (Messi) in the same team. It's what I've always wanted." This via ESPN. pic.twitter.com/UMuV1zXblA

There’s also Angel di Maria to consider. The Argentine is a close friend of Messi’s. It’s not known how Pochettino will fit him into his attack, but he’s an excellent alternative at the very least. “I’m more than happy,” Di Maria said as reported by Roger Nemer about Messi’s arrival. “Everything I dreamed about happened in one month; winning the Copa [America] and being able to play with Leo in the same team. It’s what I’ve always wanted.”