England sees the manager as the most important man in their football clubs. It’s something that’s been changing in recent years as outside influence continues to seep into the now-cosmopolitan Premier League, but it’s still an abiding thought. In Spain, however, this all-powerful figure has always been the president, a truth that’s never been more evident than right now.

They’re captains of two different ships. Barcelona are a basket case, badly hit by covid-19 and having spent the summer desperately trying to reduce their wage bill to meet La Liga’s salary cap while still renewing Lionel Messi’s contract and registering their new signings, failing on all three counts as of right now. Laporta inherited the mess, and is moving swiftly to rectify the mistakes made by his predecessor, the disgraced Josep Maria Bartomeu. He’s going to have to be ruthless and creative to steer them through the storm they’re in the midst of. 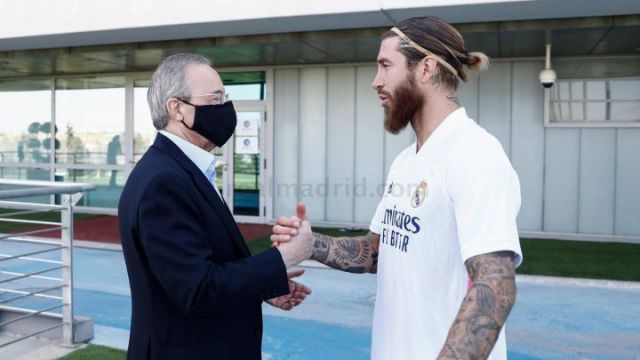 Florentino is in another situation. From a public relations standpoint, his stock is pretty low; he was the undisputed figurehead of the failed Super League project, inarticulately explaining the idea on late-night Spanish television and radio before it collapsed upon the withdrawal of the six English clubs.

He’s also been questioned on his decision-making in the transfer market; Zinedine Zidane departed this summer, citing a lack of support behind the scenes, while captain Sergio Ramos was allowed to leave on a free transfer for Paris Saint-Germain and Raphael Varane has joined Manchester United. All of Florentino’s energy, it seems, is being dedicated to signing Kylian Mbappe.

Despite this, Florentino is still making shrewd moves. Sanctioning the aforementioned departures have enabled him to cut Madrid’s wage bill, and by appointing an old hand in Carlo Ancelotti he has a trusted man who knows how to build a competent team and avoid a serious drop-off in sporting performance.

This, coupled with general prudence, has meant that Madrid actually posted a profit of €874,000 at the end of 2020/21, remarkable at a time where Covid-19 has brought many of Europe’s elite to their knees. The club also leveraged its global brand name to increase its sponsorship deals, which span from airlines to financial services providers, thereby helping its bottom line. This is the second year running that Real Madrid turned a profit, testament to Florentino’s business acumen and fiscal responsibility.

Madrid have done it by being cautious in the market, not going big and trying to compete with the likes of PSG and Manchester City at this moment in time. They’ve been smart with sponsorship deals over the years, and are currently renovating the Santiago Bernabeu. When that’s completed and fans are allowed to return they’ll have a serious source of income, and playing at the much smaller Alfredo de Stefano in the meantime saves on expenses.

Florentino isn’t stupid; he knows he’s making tradeoffs in his bid to remain in the green. Madrid’s sporting performance could suffer, in Europe especially, in the coming seasons, although with a strong pedigree in European competition, they can never be totally ruled out. Should Madrid end the season with another profit and then recruit Mbappe on a free transfer in the summer of 2022, however, it could be Florentino who has the last laugh.