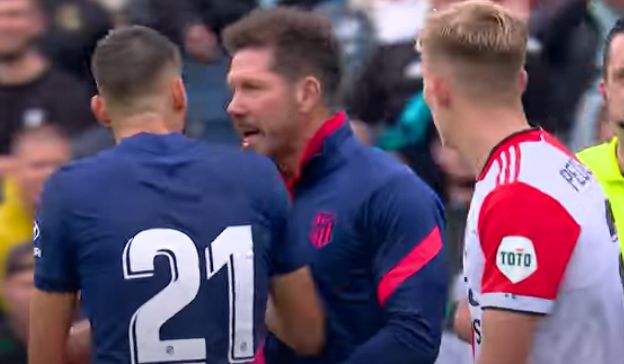 Atleti suffered a 2-1 defeat to the Dutch side on Sunday, conceding the winner three minutes into injury time.

Atleti were down to 10 man for the entirety of the second half after Yannick Carrasco was sent off four minutes before half-time.

Carrasco kicked out on an opponent, triggering furious scenes from Simeone, as well as almost all of the players on the pitch.

Both sets of players rushed to the scenes after Carrasco’s reaction and a shoving match ensued.

Simeone then rushed down to the scene and grabbed Carrasco, removing him from the situation.

Then, at full-time, Simeone complained to the referee, only to be confronted by Feyenoord boss Arne Slot.

Diego Simeone pushing Feyenoord coach Arne Slot after he tried to give Diego a hand after winning 2-1 vs Atletico 😂😂😂 pic.twitter.com/qeFbC9bNxF

Feyenoord vs Atletico Madrid was more than a pre-season match. The tackles and altercations! Diego Simeone had to run into the pitch to intervene. Yannick Carrasco got sent off. pic.twitter.com/8ZYv1pDdPz

The Atletico boss reacted by shoving Slot, who laughed as Simeone was led away.

As you can see on the videos above, Slot was asked about the confrontation by club media, and he laughed it off.