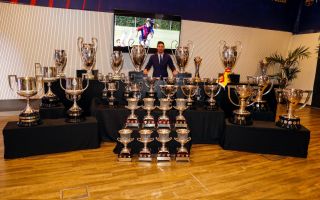 For Messi leaves a large shadow. The Argentine won ten La Liga titles during his time at Camp Nou, as well as a remarkable four Champions League titles. He also enjoyed great success in cup competitions, evidenced by a picture he took after the press conference with all of his trophies. He’s won the Copa del Rey seven times, the Supercopa de Espana seven times, the European Super Cup three times and the Club World Cup three times. He’s scored 672 goals and provided 305 assists for Barcelona.