Spain‘s dreams of clinching Olympic gold in men’s football were dashed by a 2-1 final defeat to Brazil.

However, despite the stinging disappointment of falling at the final hurdle, boss Luis de la Fuente praised his players for their endurance in the tournament and claimed that second place is strong achievement.

“We did not lose a gold, we have won a silver”, as per reports from Diario AS.

“I understand there may be a sense of sadness in the players, and even frustration. 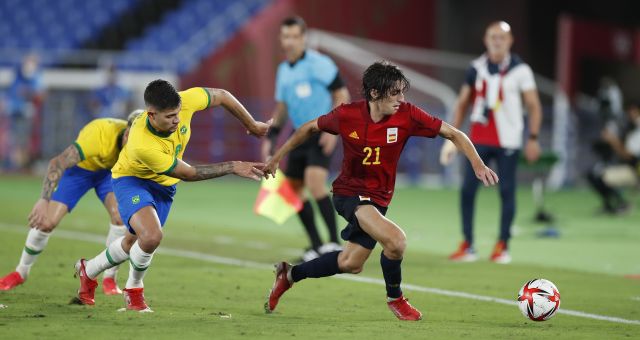 “But in the morning they will realise the important feat they have achieved. I am very proud of the behavior on and off the field.

“I am satisfied with what we’ve done in leading an extraordinary group of players who were committed to the cause of winning a gold medal.”

Defeat in the final was the first loss of the competition for de la Fuente’s charges despite a slow start to the tournament.

Oyarzabal’s late winner against Australia in the second group game provided a spark as they picked up five points from three group matches.

A 5-2 quarter final win over Ivory Coast proved to be the high point for La Roja before battling past hosts Japan in the last four.

However, the greater experience within the Brazilian ranks proved decisive in the final, with the iconic figure of Dani Alves adding to his sizeable list of trophies with an Olympic gold.