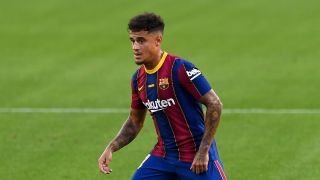 Barcelona have already decided Philippe Coutinho will not continue at Camp Nou ahead of next season despite his recovery.

Coutinho suffered a serious injury to his left knee last season that caused him to miss much of the campaign, and he later underwent surgery.

The Brazilian is now working hard to recover ahead of the new season and it’s said his recovery is going well, but it seems there will be no future for him at Camp Nou.

According to Sport, Coutinho ‘will not have opportunities’ at Barcelona this summer and the club will search for an exit for the midfielder.

Barca have not been impressed since his €135.00m arrival from Liverpool in 2019 and given he is a high earner, his departure would help them get back below the salary cap, an issue that has dominated their summer so far.

As things stand, Barcelona are unable to register Lionel Messi‘s new contract or any of their four new signings until they are under the cap or have earned enough money to so that any new deals are only worth 25% of incomings.

Big-name departures are required to achieve those new registrations and Coutinho looks set to be part of that mission for president Joan Laporta.