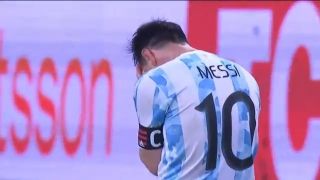 The moment the final whistle goes: Argentina win the Copa America and Lionel Messi breaks down

It’s been a rollercoaster of a year for Lionel Messi. The Argentine is out-of-contract at Barcelona and currently a free agent, with his future as clear as mud.

There was nothing ambiguous about Saturday night in Rio de Janeiro, however, as the 34-year-old lifted his first trophy as captain of Argentina.

Congratulations to @Argentina on winning Copa America. A major tournament success for Messi after so many near misses and such a long wait. He’s been preposterously good in this tournament and another Balón d’Or is a given. The undisputed 🐐 world football.

Messi played 100% of Argentina’s minutes throughout the Copa America, winning player-of-the-tournament. He scored four goals and contributed five assists in seven appearances, directly participating in 60% of their goals.

The moment the final whistle went was special, and underlined what it meant to the Argentine; it could be considered the crowning moment of an absolutely spectacular career.