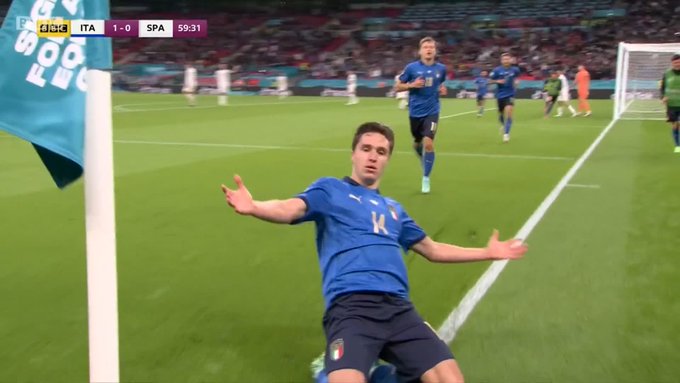 Watch: Federico Chiesa caps a ruthless break to put Italy in the lead against La Roja

The first half was tightly contested, with Spain seeing the majority of the ball but failing to put the Italians to the sword in a way their build-up play merited. The performance of 18-year-old Pedri, at the heart of the Spanish midfield, had everyone watching swooning, however. The Barcelona starlet has had an incredible tournament, nerveless on the biggest stage.

It was the Italians, however, that took a potentially decisive lead on the hour mark. They broke quickly and ruthlessly in a counter-attack instigated by the excellent Gianluigi Donnarumma and finished artfully by Federico Chiesa, putting Italy into a lead heading into the final half-hour.

25 years after his dad scored for Italy at Euro 96, Federico Chiesa's gone and done this.

In from the moment it left his boot