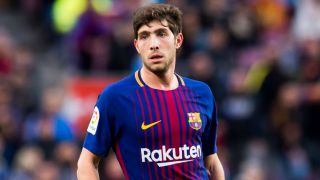 Barcelona to make U-turn on Sergi Roberto amid transfer reports

Barcelona look set to make a U-turn with Sergi Roberto with the full-back now looking likely to remain at the club.

It was thought Roberto could be made available amid Barca’s financial issues, but it now looks as though he will stay put.

According to Onze’ de ‘Esports 3, as cited by Sport, Barcelona look set to offer the versatile full-back a new deal in a surprise twist.

It’s reported that Roberto could extend his deal to 2024 – that’s a two-year extension – but with a salary reduction.

Barca president Joan Laporta is currently evaluating contracts as he looks to correct the club’s finances, hoping to reduce the wage bill enough to be able to make Lionel Messi‘s new contract official, while also registering the new signings the club have already announced.

Roberto came through La Masia and has only ever played for Barca at senior level, but he only made 15 La Liga appearances last season.

Injury issues plagued his 2021/22 campaign, the 29-year-old missing a total of 37 games in all through injuries.

Though, he is expected to remain a part of Ronald Koeman’s plans, and a reduced salary looks set to bag him two more years at Camp Nou.