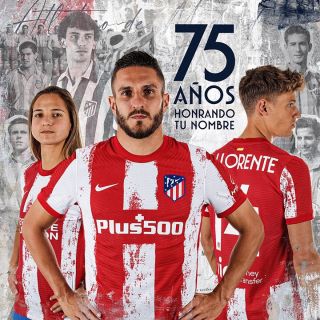 Atletico Madrid have released their three kits for next season. The home kit is, of course, in the classic rojiblanco, with a less orderly pattern than last year; more splattered paint than clean lines. Plus500 are the sponsor. The away kit is in navy with a red trim, while the third kit is in light blue with a rojiblanco collar.

Deyna Castellanos, Koke and Marcos Llorente, the latter pair away with La Roja at Euro 2020, modelled the kit. Koke enjoyed an excellent season for Atletico last year as did Llorente; the former led the team to the second La Liga title of the Diego Simeone era while the latter was the all-action star, hitting double figures in both goals and assists.

Atletico won the title on the last day of the season, pipping Real Madrid by two points. Los colchoneros racked up 86 points by matchday 38 to Madrid’s 84. Barcelona finished third, on 79 points, while Sevilla finished fourth, on 77. Regardless of what they think about the kit, Atletico fans will be hoping that the eleven players wearing the gear come matchday will prove able to repeat last year’s feats.