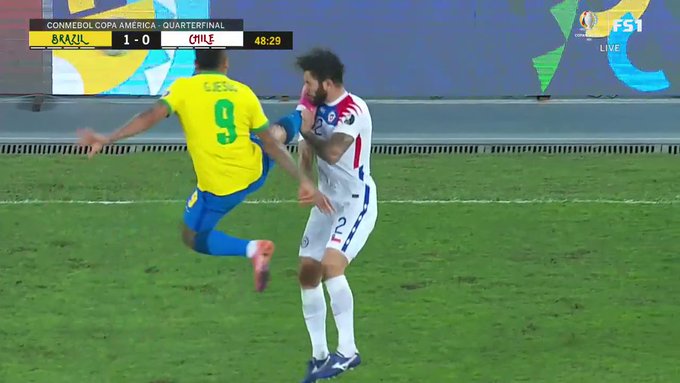 Brazil are through to the Copa America semifinals 🇧🇷

They survive the second half with 10 men to defeat Chile 1-0. pic.twitter.com/mHlPqOrXv6

Brazil managed to see the second half through, however, and book their place in the semi-finals. Neymar, formerly of Barcelona but currently of Paris Saint-Germain, played all 90 minutes, and could be about to face his old friend Lionel Messi sooner rather than later. Argentine play Ecuador in Goiania this evening.

Gabriel Jesus gets sent off with the ugly challenge. pic.twitter.com/nLpxuE8uDb

Brazil joined Peru in the draw for the semi-finals, who beat Paraguay 4-3 on penalties after drawing 3-3 after extra-time. Luis Suarez’s Uruguay face Colombia in the final quarter-final. Messi is the top-scorer in the competition so far, with three goals from four games, while the Argentine has also provided two assists; more than anyone else except for Neymar.