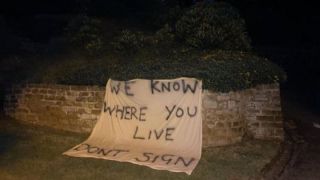 Rafa Benitez is on the verge of replacing Carlo Ancelotti at Everton, but it’s not an appointment that’s overly popular amongst Evertonians. There’s been a movement against the appointment since negotiations became known a week ago, with things going a step too far on Monday.

According to Diario AS, a bedsheet was placed near Benitez’s family home on Merseyside where he lives with his wife and daughters. “We know where you live, do not sign,” read the message. Other graffiti has been etched outside Goodison Park in the last few days, with a significant number of Evertonians clearly incensed by the move.

This banner is online. It has been posted not far from where Rafa Benitez lives with his wife and his daughters. It’s sinister, it’s reprehensible and the people responsible for it should be ashamed. They are a disgrace. pic.twitter.com/6prhZt16vX

Benitez is keen to return to the Premier League after a spell in Chinese football, but the problem for many Evertonians is the Spaniard’s close links with Liverpool, their great rivals. Benitez led Liverpool to the 2005 Champions League, and is fondly remembered at Anfield. Benitez, born in Madrid, has also had notable spells in La Liga coaching Valencia and Real Madrid.