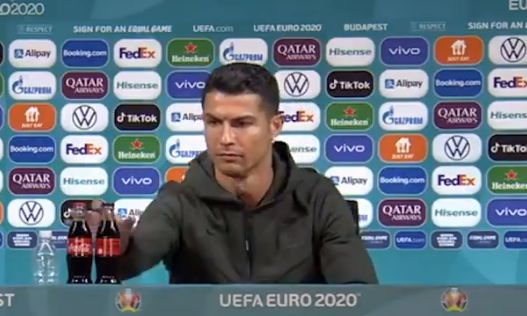 Ronaldo sent a witty message over Coca Cola during a Portugal press conference during Euro 2020.

After taking his seat during a press conference, the former Real Madrid superstar picked up the two bottles of Coca Cola which were laid out ready on the desk and said “Water. Coca Cola…”

He passed the drinks along the desk and grabbed a bottle of water, telling people at home which of the drinks was a healthy choice.

But what Ronaldo may not have realised is the huge financial impact he would have on Coca Cola with those words.

As reported by Marca, at the market’s open in Europe, Coca Cola’s shares were worth $56.1, but by the time Ronaldo and his Portugal boss Fernando Santos left their seats at the press conference, shares had dropped to $55.2 each.

Though, given the size of the company and the fact they are plastered all across advertising boards for the duration of Euro 2020 as one of the competition’s main sponsors, they are likely to bounce back swiftly.