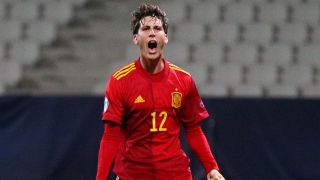 Watch: Juan Miranda makes it 3-0 to La Roja against Lithuania

Gil, contracted to Sevilla but someone who made his bones on loan at Eibar last season, is joined in the starting lineup by fellow La Liga mainstays Oscar Mingueza, of Barcelona, and Marco Cucurella, of Getafe. It was Valencia centre-back Hugo Guillamon, however, who gave Spain a fourth-minute lead. The ball fell to him at the edge of the box and he made no mistake with an excellent, cool-headed finish. Brahim Diaz soon made it 2-0, finishing neatly after a visionary pass from Gonzalo Villar, before Juan Miranda, recently signed by Real Betis from Barcelona, made it 3-0 with a free kick from 25 yards out.