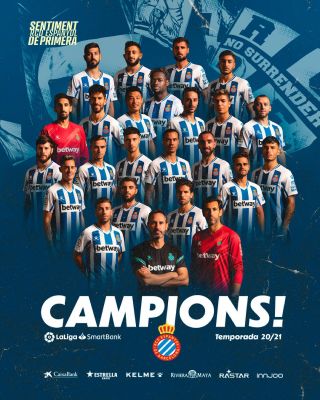 Espanyol have been confirmed as 2020/21 Segunda Division champions despite losing on the final day of the season.

The Catalans secured their immediate return back to La Liga earlier this month but they snatched the title based on their head to head record over second place Real Mallorca.

The Balearians missed the chance to nick top spot as they drew 2-2 at Pontferradina and Espanyol lost 1-0 at Alcorcon.

Leganes kept third place ahead of Almeria and Girona respectively with Rayo Vallecano edging out sixth place on the last day despite their own defeat.

Rayo will face off with Leganes in the play off semi finals with the winners up against the victors of Almeria v Girona next week.

Down at the bottom of the table, there was drama in the relegation zone, as Sabadell, UD Logrones, Castellon and Albacete all slipped through the trap door into the Segunda Division B for the 2021/22 campaign.