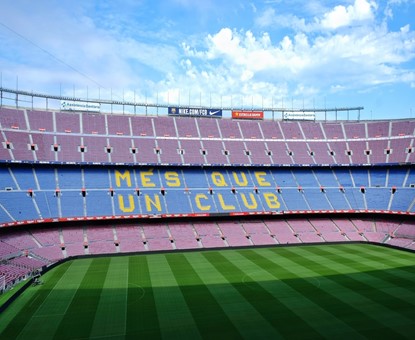 After being knocked out of the Champions League, and with the La Liga title now out of their reach, Barcelona’s hierarchy should be looking to next season to ensure the same mistakes aren’t made again.

After all, the fans and players won’t accept another campaign like the past couple of seasons.

Barca is arguably the biggest club in the world, along with Real Madrid and Manchester United, and can’t be competing for third place in the league and the quarter finals of the Champions League every year.

To stop that from becoming the norm, the team needs serious reinvestment.

However, with the coffers bare, who can the Catalans add to their ranks to bolster the squad?

Although it wouldn’t be a signing in the normal sense of the word, there’s no doubt that Lionel Messi is still the most important member of Barca’s team.

Sadly, the Argentine has fallen out with the club’s management, leading the greatest of all time to hand in a transfer request last year.

Things have calmed down since then, and the fact that former president Joan Laporta has returned to the helm could ease Messi’s nerves.

The fact is that Laporta needs to make this signing his number one priority.

Without their No. 10’s goals and assists this campaign – Messi has 30 goals and 9 assists in La Liga so far – they would have been a lot further off the pace.

A shot at winning the league wouldn’t have presented itself if it wasn’t for Barca’s main man putting the squad on his shoulders.

Of course, anything is possible with Messi in the team, so fans, players and directors will be hoping he changes his mind and stays put.

If he does, lots of punters will be using their money to back Barcelona for the 2022 title.

In conjunction with a cheeky BetMGM promo code, plenty of Cules could be in the money at the end of the season.

Keeping Messi won’t be enough for Laporta, especially since the Argentine wants to see investment in the squad if he is going to stay.

Barca’s ill-fated flirtation with a European Super League hasn’t gone down well so far, and, as a result, the money taps have been turned off.

This leaves Ronald Koeman and Co in a tricky spot because the Dutchman’s transfer budget will be mediocre.

Thankfully, Sergio Aguero, Messi’s long-term friend and compatriot, is set to leave Manchester City on a free transfer in the summer.

Aguero isn’t only a comfort blanket for Messi, but a clinical forward who has one of the best finishing instincts in the game.

Few can believe Pep Guardiola is letting him leave.

The good news for Cules is that FC Barcelona appear to be making moves already, with BBC Sport reporting that both parties are in negotiations and want the move to go ahead.

The midfield has been a weak point for Barcelona ever since Andres Iniesta and Xavi Hernandez moved and retired, respectively.

Many signings have tried and failed to make an impact in the centre of the park, including Philippe Coutinho, the man once considered to be Iniesta’s long-term replacement.

Frenkie de Jong is the future of the midfield and has shown enough for the board and coaching staff to put their eggs in his basket.

Still, he needs help, particularly since Sergio Busquets is in his mid-30s. In Gini Wijnaldum, Barca would have an all-action centre-mid with quality and footballing intelligence.

Plus, his Liverpool contract looks set to run out, making him available on a free transfer.

Aguero and Wijnaldum could be ideal acquisitions, yet the club’s main priority should be ensuring Messi renews his contract.