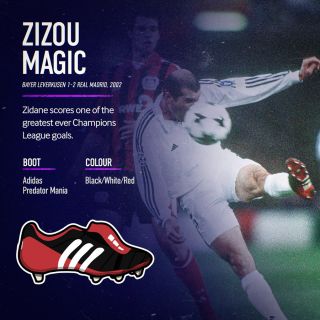 La Liga powerhouses Real Madrid and Barcelona have been involved in some of the most famous Champions League finals.

The pair have produced some of the most notable nights in Europe’s premier competition with some of the greatest players of all time.

The famous all white strip of Real Madrid and claret and blue stripes of Barcelona are synonymous the tournament with the final showcasing some of the most iconic football boots see in the biggest club game in world football.

Yugoslavia star Mijatovic was famed for his no frills Puma Kings during his career at Real Madrid in the early 90’s.

His big moment came in the 1998 Champions League as his second half strike secured Los Blancos’ first major European title since 1966.

Current Real Madrid boss Zidane wore Adidas Predators for the majority of his career with the stylish touch perfect for the Frenchman’s midfield brilliance.

Zidane scored his fair share of outrageous goals during his time in Los Blancos engine room but his most famous one came in the 2002 Champions League at Hampden Park.

As Roberto Carlos crossed looped down out of the Glasgow sky Zidane arched home an incredible one touch volley for a strike that was later voted as greatest ever Champions League final goal by a BBC Sport poll.

Barcelona talisman Messi has one four Champions League titles during his time in Catalonia.

However one of his most awe inspiring nights came in the 2009 final win over Manchester United with the Argentinian superstar rocking the Adidas F50i latest edition in Rome.

Despite being much shorter than United defensive pair Rio Ferdinand and Nemanja Vidic outjumped the pair to power home a rare header.

Whatever happens with Messi’s future in Catalonia this summer his legacy at the Camp Nou is eternally preserved.

The 2014 final pitted Zidane’s side up against arch rivals Atletico Madrid with Ronaldo looking every inch the superstar in his custom orange Nike Mercurial Vapor IX’s.

Sergio Ramos’ added time header sent the game into extra time with Ronaldo bulleting home from the spot in the final seconds as Real Madrid overturned the tie to win 4-1 to seal La Decima.

However, with the Reds hauling themselves back into the game after the break, Zidane threw on Bale as a late substitute.

Despite only playing a bit part role in the months leading up to the final, Adidas X18+ wearing strode off the bench to score an outrageous bicycle kick to put Real Madrid on route to a 3-1 win.