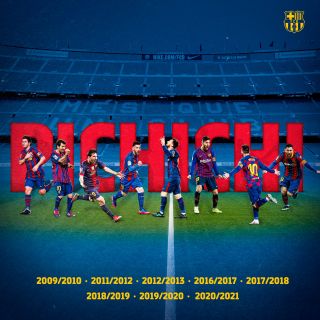 The Pichichi Trophy – awarded to La Liga’s highest scorer each season – has been dominated by Messi in recent years, with his 2021 win coming in as a fifth straight success for the 33-year-old.

Messi was omitted for Barcelona’s final game of the season as Antoine Griezmann’s fine goal secured a 1-0 win away in their dead rubber against already relegated Eibar.

However, despite a poor end to the season for Ronald Koeman‘s side, it has been another impressive individual campaign for Messi.

The Argentinian’s 30 league goals means he has now scored 30+ goals in league action in four of the last five seasons with his all competitions tally of 38 goals improving on his 2019/20 total of 31.

Messi’s future looks set to dominate Barcelona transfer news in the coming weeks as he prepares to sit down and discuss his future before heading off on Copa America duty.

His current deal expires at the end of June, and he remains unconvinced over an extension at the Camp Nou.