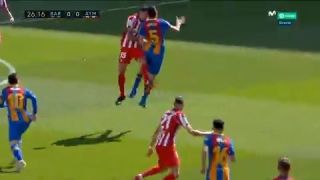 Watch: Sergio Busquets suffers nasty head collision and has to come off against Atletico Madrid

Barcelona host Atletico Madrid this afternoon in a clash absolutely pivotal to their hopes of winning La Liga. The Blaugrana are third in the table on 74 points, level with Real Madrid in second.

Atletico lead the way with 76, while Sevilla make up the top four with 70. Should Barcelona beat Atletico, they’ll just have to rely on Madrid to drop points to take the race back in their own hands.

Just over 24 hours after Barcelona’s game with Atletico, Madrid play Sevilla at Valdebebas. Hurting from their Champions League humbling at the hands of Chelsea midweek, Madrid could stumble under pressure should the Blaugrana win the day before, but if Barcelona drop points a path to glory will open up for Madrid.

Atletico started the season like a train but have fallen off since the dawn of the new year, while Barcelona started like a snail only to hit serious heights domestically from the beginning of 2021.

Diego Simeone will be looking to lead Atletico to their second league title under his reign. Ronald Koeman’s side, having already won the Copa del Rey, are keen to claim a domestic double deemed impossible before Christmas.

The game started slowly, but wasn’t without its moments. Lionel Messi played an incredible pass, while Clement Lenglet made an incredible challenge. Both Thomas Lemar and Sergio Busquets came off injured early doors, however, with the latter suffering a particularly nasty head collision.