Gerard Pique: We expected to beat Atletico Madrid but will fight on in La Liga title race

Barcelona star Gerard Pique has insisted his side are still in the running to win the La Liga title this month.

La Blaugrana played out a lacklustre 0-0 draw at home to league leaders Atletico Madrid as Ronald Koeman‘s side missed the chance to overhaul their rivals in the title race.

The result means Atletico’s lead edges up to three points at the top, but Real Madrid will claim top spot tomorrow night if they beat Sevilla, based on their head to head record with their city foes.

However, despite missing the chance to impact the title race with a win in Catalonia, Pique insisted the battle has a long way to go this season. 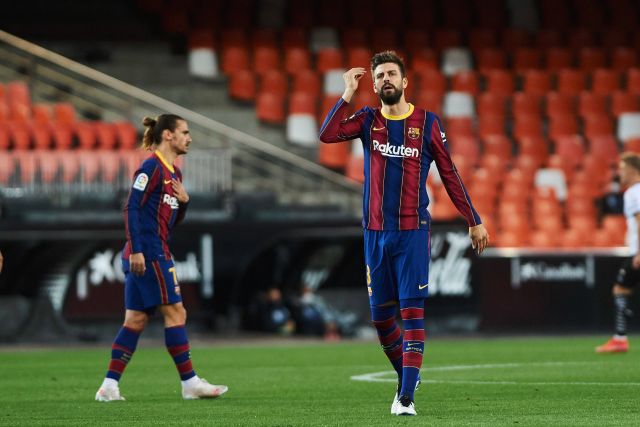 “We expected to win, but we are still alive. We had more chances and we competed well,” he told a post match interview with Movistar+, covered by Marca.

“We are alive, and based on how La Liga is playing out and I think we still have options.

“Anything can happen, because that is what happens in La Liga.

“It is true that Real Madrid, if they win all four games, will be champions, but it will be difficult.

“I think by winning our three remaining games we have options. Our idea is to win every game and compete until the end.”

Barcelona will now wait on the result between Los Blancos and Sevilla in Madrid tomorrow night where a draw or an away win would complicate the picture even further.

Up next for the Catalans is a midweek trip to Levante followed by a home game against Celta Vigo and a final day trip to struggling Eibar.