Veteran Barcelona midfielder Sergio Busquets has been transferred to hospital after suffering a head injury in their 0-0 draw with Atletico Madrid.

Ronald Koeman‘s side missed the chance to leapfrog Atletico at the top of the La Liga table with a stalemate in Catalonia with Busquets’ injury one of the biggest talks points from the game.

The Spanish international collided with Stefan Savic when challenging for a header on the half hour mark and required several minutes of on field treatment. 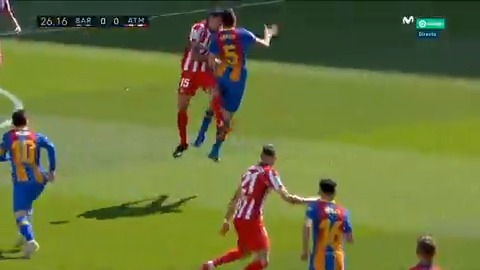 Despite initially trying to return to the pitch and carry on, he indicated to the Barcelona bench he could not continue and he was replaced by Ilaix Moriba.

According to reports from Diario AS, he was taken to a local hospital for tests after the game with an update on his condition expected in the next 24 hours.

If the 32-year old is deemed to have suffered a concussion he will be forced to sit out Barcelona’s next two games away at Levante and at home against Celta Vigo.