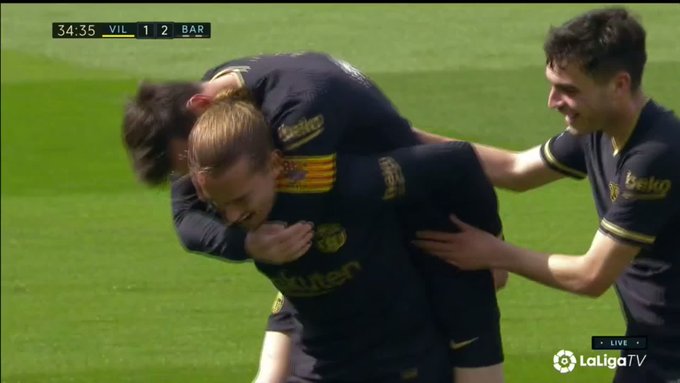 Watch: Juan Foyth’s error capitalised upon by Antoine Griezmann to put Barcelona into the lead at Villarreal

Barcelona, after winning the Copa del Rey, are fully focused on winning La Liga and earning the double in Ronald Koeman’s first season in charge of the Blaugrana. They face Villarreal this afternoon at La Ceramica, a game which is a great chance to put pressure on Atletico Madrid before they face Athletic Bilbao this evening.

Villarreal, in Gerard Moreno, have one of the most in-form forwards in European football, and his history with Espanyol means he doesn’t hold the Blaugrana in very high esteem. Villarreal face Arsenal in the first leg of their Europa League semi-final this coming Thursday, but Unai Emery has made clear their focus is on Barcelona and Barcelona only.

Villarreal took the lead in the 27th minute through the in-form Nigerian winger Samuel Chukwueze, who converted neatly after superb work from the highly-rated and much-discussed La Roja centre-back Pau Torres in the buildup in the form of an incisive pass. Barcelona got back on level terms two minutes later, when Antoine Griezmann scored courtesy of a delicious little dink over Sergio Asenjo, before completing the remontada in the 36th minute when he seized on an error from Juan Foyth.

Griezmann makes it 2-1 with an assist from…Juan Foyth! 😬

The Villarreal defender won't want to see that one again 🤦 pic.twitter.com/yeA7uHgbxE