Samuel Chukwueze on Unai Emery: “He’s amazed me, how I’ve seen him change things from game to game”

Villarreal welcome Barcelona to La Ceramica tomorrow afternoon in La Liga in another pivotal clash. The Blaugrana, who have a game in hand on their title rivals, could jump ahead of Real Madrid into second with a win depending on how Los Blancos do against Real Betis this evening.

That game will also be of interest to the Yellow Submarine. They’re level on points but a place behind Betis, sitting in seventh and outside of the European places. They have a Europa League semi-final with Arsenal on the horizon, but will be keen to maintain good domestic form after losing to Alaves midweek.

Barcelona beat Getafe 5-2 on Thursday night, inspired by Lionel Messi, who scored a brace and provided an assist on top of that. Two men key to Villarreal’s chances of getting something tomorrow evening will be the in-form Gerard Moreno as well as the fleet-footed Samuel Chukwueze. 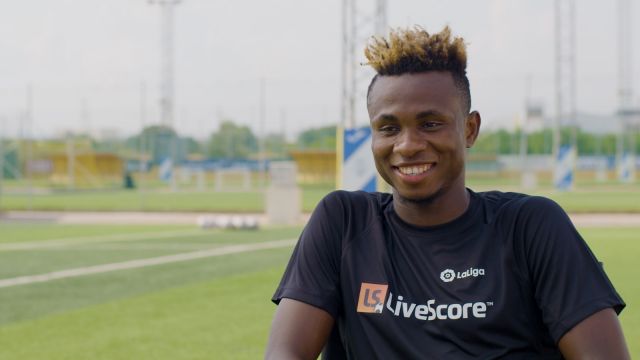 “I think it’s changed so much, coming from Nigeria to come and play in Europe at Villarreal,” LaLiga ambassador Chukwueze, speaking at an event for LiveScore, said of his game.

“Before I saw football as entitlement just to play how I want, attack, dribble, to entertain the fans. Now I think I understand what it means to be tactically disciplined, knowing when to attack, when to defend. I think my overall understanding of the game has changed a huge amount.

“I enjoy playing under Unai Emery. He’s amazing, and so tactical in everything he does. He can push you to the limit, but he’s a fantastic coach. He has an amazing football brain. He’s amazed me, how I’ve seen him change things from game to game. Sometimes when I watch him from the bench, I’ve looked at him and noticed changes he makes which work for him that are great to see. He’s so good at his job and he’s a fantastic coach.”

Chukwueze said that following Villarreal’s 4-4 draw with Barcelona back in 2019 he couldn’t sleep after the game so strong was his admiration for Messi, who scored and made two goals in the final moments of the game.

“On Sunday I think I’m going to sleep very well,” Chukwueze joked when reminded of this. “For me, if we play our game, I’ll get a good night’s sleep, but anything can happen, this is football. We’re going to try our best to win, that’s the most important thing, just to win. This will help us maintain our position in La Liga. I’m confident I’ll sleep well this Sunday!”