Watch: Karim Benzema strikes the post for Real Madrid against Liverpool at Anfield

Real Madrid travelled to Merseyside this evening to take on Liverpool at Anfield in the quarter final second leg of the Champions League. Los blancos went into the game with a 3-1 lead from the first leg back in Spain last week, but were wary of the danger posed by that away goal. They took solace in the fact that Anfield was without its fearsome atmosphere, however, like the one that famously met Barcelona back in 2019. 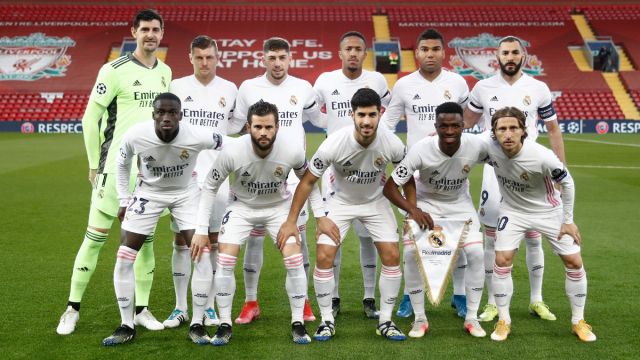 Zinedine Zidane opted for a 4-3-3, with Thibaut Courtois starting in goal behind a back four of Fede Valverde, Eder Militao, Nacho and Ferland Mendy. Casemiro anchored the midfield, with Toni Kroos and Luka Modric either side of him. Karim Benzema led the line and captained the side in Sergio Ramos’ absence, flanked by Marco Asensio and the star of the first leg, Vinicius Junior.

Madrid’s bus was attacked before the game, struck by a missile that broke one of the windows. The action on the pitch itself was also fast and furious, with Courtois drawn into two excellent saves from Mo Salah and James Milner respectively in the first 15 minutes. Benzema had Madrid’s best chance early doors, striking the post in the 20th minute.