Javier Tebas has assured there will be a conclusive solution to the racism row that has enveloped Spanish football in recent days. Cadiz’s Juan Cala is said to have racially abused Mouctar Diakhaby of Valencia, with Tebas, according to Marca, assuring that the situation will be clarified as soon as the audio of the incident is cleaned and the lip-reading completed.

“Throughout tonight and tomorrow there will be more news on the Diakhaby situation,” he said. “But the audio that we’ve studied is one minute and thirty seconds following the incident, and the one that says that expression [the racist abuse] has a South American accent and therefore isn’t Cala. 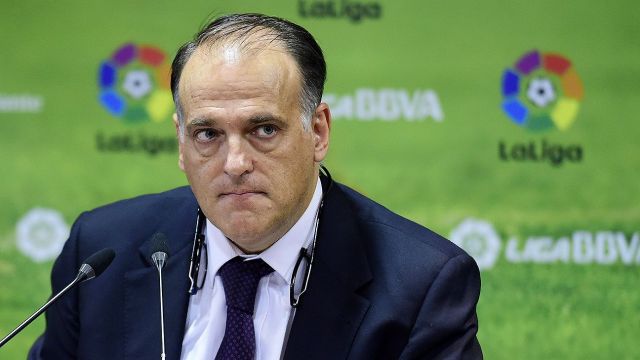 “We’ve commissioned the cleaning of all the recordings that may exist to see what can be heard at the time. And we have commissioned expert lip-readers to find out, at the moment Cala turns around and says something, what he says. I believe there’ll be a report with what Cala’s lips say.”

Cadiz’s match with Valencia was interrupted for 25 minutes due to the incident, with the game effectively paused in the 36th minute. Valencia left the field after the incident only to return, without Diakhaby, minutes later. Cala continued until half-time.

Tebas, a former lawyer, was elected as La Liga president in 2013. His expertise was in business, sports and bankruptcy law, and he came to power promising to clean up the Spanish game after match-fixing allegations and to reduce the cost of match tickets.

Born in Costa Rica, he studied law in Zaragoza and supports Real Madrid, although he maintains it doesn’t affect his neutrality as president. In December 2019, he was re-elected for a third term that will run until 2024.