Valencia have issued a strongly worded statement directly towards Cadiz player Juan Cala and in defence of their own defender Mouctar Diakhaby.

Los Che defender Diakhaby alleges that he was racially abused by Cala during the 29th minute of Sunday’s clash in La Liga.

Diakhaby walked off his pitch, with all of his teammates following him in an act of solidarity. 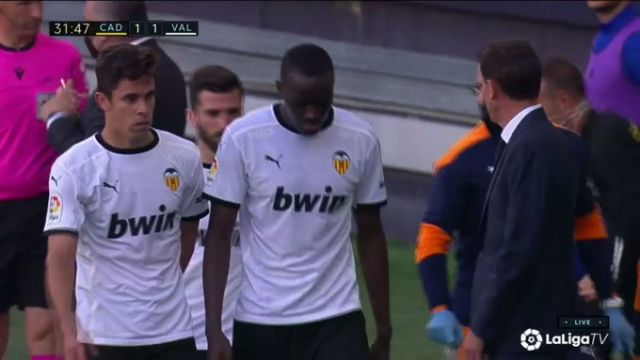 However, the game was soon after restarted without Diakhaby – who was substituted off – with contradictory reports subsequently regarding precisely what had happened.

Read more: La Liga chief Tebas on claims of racism in Cadiz v Valencia: “We have carried out an internal investigation procedure. It is clear that something happened”

On Tuesday, Diakhaby posted a video on social media insisting that he had been racially abused by Cala and that another player from the Andalusian club had approached him after the game was halted: “A Cádiz player asked us if he (Juan Cala) asked me for his forgiveness whether I would continue playing. We said no.”

Cala then gave a press conference on Tuesday in which he fully denied all the allegations made by Diakhaby, insisting that he did not make any such claim and threatened to take legal action against those who had defamed him.

Juan Cala’s press conference concludes.
Summary:
– He insists he is innocent.
– Claims this has set a “dangerous precedent”.
– Claims he is victim of “public lynching/witch hunt”
– Will not contact Valencia’s Diakhaby
– Threatens to sue Diakhaby and anyone who has defamed him.

Valencia then responded to the press conference in this club statement:

Valencia CF deeply regrets the statements of the Cádiz player, Juan Cala, in which 48 hours later he denies that he uttered a serious racist insult to our footballer, Mouctar Diakhaby, during the match played on Sunday at the Ramón de Carranza.

Juan Cala has lost a great opportunity to accept that mistake and apologise to the person affected. Instead, he has attacked the player himself and other members of Valencia CF.

Valencia CF totally believes in its footballer and reiterates its full support for him. After the threats of Juan Cala in his press conference on Tuesday, April 6, the Club, its president Anil Murthy and his player Mouctar Diakhaby keep intact their deep conviction to fight where necessary and until the end for the good of football. Valencia CF will not stop fighting for the improvement of regulations and the fight against racism in football and in society.