Real Sociedad have clinched their first Copa del Rey title since 1987 thanks to a tight 1-0 win over Athletic Bilbao in Seville.

The Basque rivals eventually faced off in their rescheduled 2020 final at the Estadio de La Cartuja on a rain soaked night in Andalucia.

Former La Real defender Inigo Martinez played a key role at both ends on the night as his first half piledriver was expertly kept out by Alex Remiro. 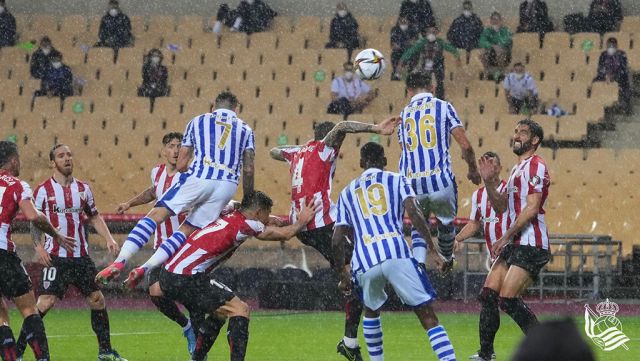 But the Spanish international was to suffer a slip in judgement on the hour mark as his handball inside the box gifted Imanol Alguacil‘s side a perfect chance to take the lead.

Despite a VAR delay, with Martinez’s original red card downgraded to a yellow, Mikel Oyarzabal kept his cool to tuck home the decisive spot kick.

Martinez did almost snatch an equaliser during eight minutes of added time but Remiro was once again on hand to deny him.