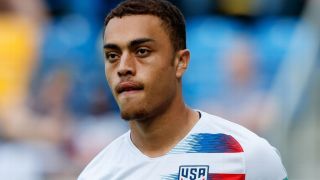 Watch: Sergino Dest scores golazo for the USMNT against Jamaica

Sergino Dest has been flying recently, with the Barcelona defender scoring his first goals for his new club in a brace at Real Sociedad in La Liga last weekend, a crucial game for the blaugrana in their bid to chase down Atletico Madrid.

He’s followed up that goalscoring turn on international duty with the United States, with Dest hitting a golazo in a friendly against Jamaica on Thursday evening in Austria. The 20 year old will be a key cog in a talented generation for the UMNT moving forward.

Born in the Netherlands to a Dutch mother and an American father, he’s represented the United States at senior level since 2019. Dest began his career with Almere City before joining Ajax at the age of 12. He rose up the ranks in Amsterdam until this past summer, when Ronald Koeman, just in the job, handpicked him as the Catalan’s right-back of the future.