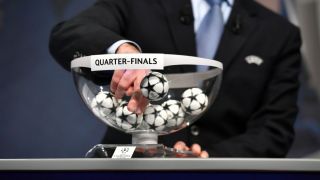 The Champions League draw for both the quarter finals and semi finals of this year’s competition took place on Friday morning.

Real Madrid are the only Spanish team remaining in the tournament and the 13-time record winners will face current Premier League champions Liverpool.

Barcelona, Sevilla and Atletico Madrid were all eliminated at the Round of 16 stage in the Champions League.

The final will be played on 29 May 2021 at the Atatürk Olympic Stadium in Istanbul.