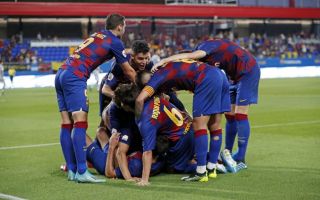 The B team of Barcelona will be allowed to have fans for their upcoming Segunda B clash against Cornella this weekend.

The two will go head-to-head at the 6,000-capacity Estadi Johan Cruyff on Sunday, with 1,000 fans allowed to attend by the Catalan health authorities.

As detailed by El Mundo Deportivo, the regional ruling means that fans are allowed to return to sporting events in limited capacities outside of those under the jurisdiction of La Liga (the top two divisions of Spanish football).

This also means that Barca’s Femeni side will also be able to have fans returning in the weeks to come, as the rates of Covid-19 ease throughout the region and with a mass vaccination campaign underway.

This trend is happening across Spain, with Real Betis Deportivo beating Linares Deportivo 4-0 last weekend in front of 700 fans.

As per El Mundo Deportivo, the Catalan club will decide based upon a ballot which fans will be lucky enough to attend Barca’s B team – which will be the first game in front of fans in over a year for the club.