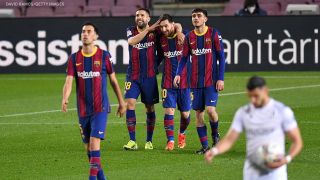 Monday night’s La Liga action was all about Lionel Messi as he netted a double in the 4-1 win for Barcelona over basement side Huesca at the Camp Nou.

It was another match-defining display from the Argentine star in a game where he equalled the all-time club record appearance record held by former captain Xavi Hernandez.

It was appearance number 767 in the Blaugrana shirt for Messi and he celebrated it by scoring goals 660 and 661.

Barca boss Ronald Koeman took to social media to praise his attacking star for the achievement.

Koeman is cited as telling his post-match press conference, as per El Mundo Deportivo: “Luckily Messi is still with us.”

Messi news has centred on the player’s future beyond the current campaign as he is out of contract at the Catalan giants on 30 June, and is theoretically free to speak to other clubs at the moment.