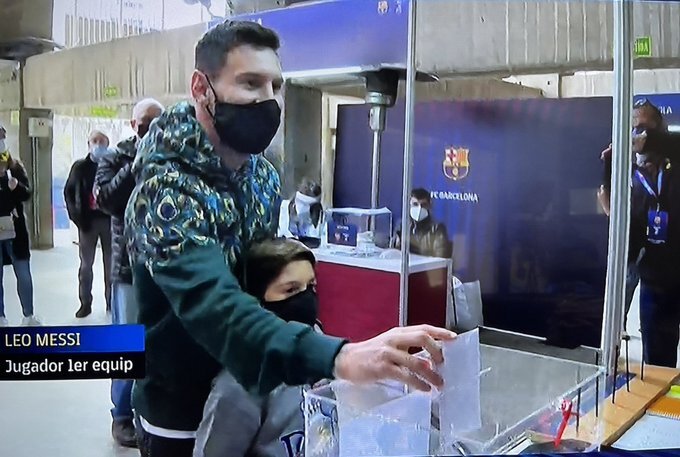 Barcelona captain Lionel Messi and long-serving midfielder Sergio Busquets have both cast their votes in the club’s presidential election this Sunday morning according to Mundo Deportivo. Joan Laporta, Victor Font and Toni Freixa are all running to become the club’s next president, with the election coming at an absolutely pivotal time in Barcelona’s history.

Messi’s future has been a key feature of the debates leading up to the election, with each candidate professing their ambition to retain the Argentine star beyond the expiration of his current deal this coming summer. Of the three, however, Laporta is best placed to do so, it would seem. It was under his presidency, which ran from 2003 to 2010, that Messi broke into the Barcelona first team, and he’s traded heavily on his strong personal bond with him throughout the lead-up to the election.

Messi, whose future is among the big issues facing the new president at Barca, has voted at Camp Nou this morning in the election. Result expected in +/- 11 hours. Laporta, Font & Freixa the runners https://t.co/ViNrv5UlWF pic.twitter.com/CCdApbOn0Y

On the pitch, things are looking up for Barcelona, and the election comes at a moment of optimism for a club that’s endured a tough 12 months. Last night’s defeat of Osasuna has closed the gap to league leaders Atletico Madrid to just two points, while youngsters like Ilaix Moriba, Pedri and Ansu Fati have shined under the tutelage of coach Ronald Koeman.