Lionel Messi and Monchi clash in the tunnel

Barcelona‘s epic Copa del Rey comeback against Sevilla was a heated encounter, with no shortage of bad blood developing between the two clubs this season. Barcelona won 2-0 to progress with the game ending in controversial circumstances, and according to a report in Diario AS there was friction between Barcelona captain Lionel Messi and Sevilla sporting director Monchi in the tunnel post-game.

Monchi was going into the Sevilla dressing room when several Barcelona players noticed him, still irritated by the comments he made about Ronald Koeman when the two sides met in La Liga on Saturday and he called Koeman a crybaby. The argument intensified and a very heated situation evolved where Monchi shouted: “You always win the same!”. The Barcelona players replied: “Today, you go home warm.” 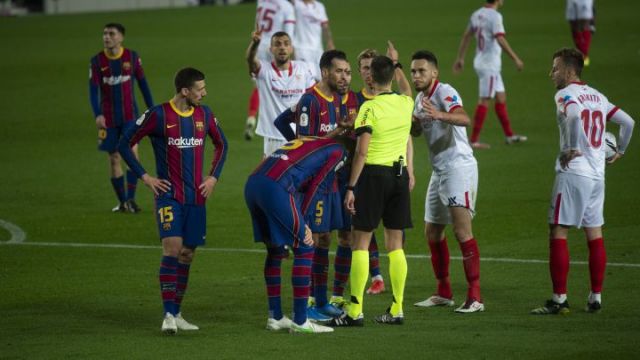 The fiery atmosphere was also evident on the pitch, with Sevilla coach Julen Lopetegui audibly unhappy with several decisions taken by the referee. Fernando was sent off late on after pulling down Francisco Trincao and earning himself a second yellow, while Luuk de Jong and a member of the Sevilla backroom staff were sent off from their positions on the bench for remonstrating about the decision to not award Sevilla a penalty.