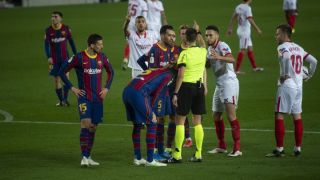 Barcelona battle Sevilla off the pitch as well as on it

In a jubilant and defiant mood post-game following Barcelona‘s 3-0 comeback defeat of Sevilla in the semi-final second leg of the Copa del Rey last night, sparks flew on social media as well as on the pitch, underlining the heated nature of their rivalry as noted in a report by Diario AS. The actual clubs, former players and current players were involved.

Carles Puyol, one of Barcelona’s legends, quote-tweeted a message Sevilla’s Suso posted after the first leg where he called Pedri a crybaby, wishing him goodnight. Barcelona’s official Twitter account also quote-tweeted their Sevilla counterparts’ post of a meme making light of Gerard Pique trying and failing to catch Kylian Mbappe in last month’s Champions League clash, telling them that football is a matter of respect.

The fiery atmosphere was also evident on the pitch, with Sevilla coach Julen Lopetegui audibly unhappy with several decisions taken by the referee. Fernando was sent off late on after pulling down Francisco Trincao and earning himself a second yellow, while Luuk de Jong and a member of the Sevilla backroom staff were sent off from their positions on the bench for remonstrating about the decision to not award Sevilla a penalty.