Rakitic on Sevilla’s Copa clash with Barcelona: “We want to fight to play that final in our city”

Back in the Andalusian capital after six trophy-laden years in Catalonia, Ivan Rakitic will come face to face with his former employers Barcelona with his current employers Sevilla tomorrow evening at Camp Nou. The two sides lock horns in the Copa del Rey semi-final second leg, a tie Sevilla have a 2-0 advantage in. Rakitic scored in the first leg, and will be important tomorrow.

“I’m a more complete player,” Rakitic said pre-match in comments carried by Diario Sport. “I now enjoy football more than before, and I appreciate each moment much more and each detail is more important. I must perform better, of course. It’s normal after six years being in Barcelona with a certain way of playing. What the team are doing is incredible, not normal.”

Barcelona beat Sevilla in La Liga this past weekend, 2-0 at the latter’s Sanchez-Pizjuan. Rakitic was keen to play down the idea that it could have a significant impact on the Copa game. “One match has nothing to do with the next,” he said. “The first leg of the Copa was also very different. What we want to convey is that we have a tremendous ambition of reaching the most beautiful match that can be played in Spain. We know that for [Barcelona] it’s more of an obligation, while we want to enjoy it. We want to fight to play that final in our city.” 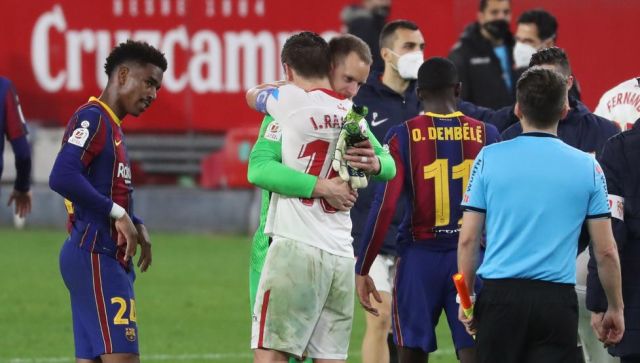 Sevilla are five points behind Barcelona with a game in hand in La Liga, having lost ground with the defeat at the weekend. They’re six points clear of Real Sociedad, in fifth, also with a game in hand, and are endeavouring to turn the big three into a big four this season by consolidating fourth place and a Champions League spot. As well as a shot at the Copa, they’re also still alive in the Champions League, albeit fighting an uphill battle having lost 3-2 at home to Borussia Dortmund in the last 16 first leg.