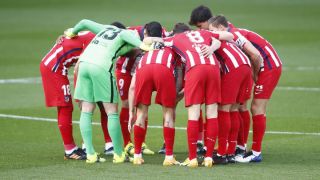 Tonight sees the continuation of the Champions League Round of 16 stage with Atletico Madrid naming an attacking starting line-up in their clash against Chelsea.

Diego Simeone starts star attacking players Joao Felix and Luis Suarez while there is also a return to the line-up for Argentine attacker Angel Correa, while Thomas Lemar is also named from the start.

Saul Niguez and Koke anchor the midfield, meaning that there is no place in the starting line-up for Geoffrey Kondogbia, while Marcos Llorente is also named in the side.

Whilst Atleti’s graphic appears to show them lining up in a 4-4-2 formation, it is more likely that they will play a 3-5-2 with Llorente and Lemar operating as wing-backs, with Mario Hermoso, Stefan Savic and Felipe in a back three.