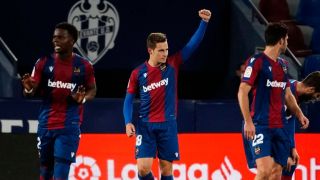 Levante revitalised the title race on Saturday afternoon by beating Atletico Madrid 2-0 at the Wanda Metropolitano in La Liga. Jose Luis Morales took the lead on the stroke of the half-hour before Jorge de Frutos doubled their advantage at the death. De Frutos’ goal was a cracker, counter-attacking superbly before letting rip with an effort from the halfway line.

Atletico face a challenging run. They play Chelsea in the first leg of the Champions League last 16 before travelling to Villarreal and then hosting Real Madrid. Cholo Simeone’s men then play Athletic Bilbao and Getafe before the second leg with Chelsea.