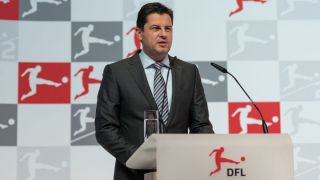 The CEO of the Bundesliga has launched a thinly-veiled attack on clubs – such as Barcelona and Real Madrid – who are planning to create their own European Super League.

Christian Seifert, chief executive of the German Football League (DFL), was speaking at the Business of Football event being held by the Financial Times, whereby he questioned the financial ability of those clubs who were driving the move.

Both Real Madrid news and, more pressingly, Barcelona news has in recent times focused on the club’s mounting debts.

Madrid president Florentino Perez is reported by The Times to be the main driving figure behind plans from top tier clubs in the continent to form their breakaway Euro Super League while former Blaugrana president Josep Maria Bartomeu in October confirmed that the club had accepted to be part of the plans.

However, Bundesliga chief Seifert has now hit back at those clubs – whom he did not name, but were inferred to be these Spanish clubs due to what information is in the public realm – and their long-term planning.

1st two-footed challenge of #FTFootall! Bundesliga CEO Christian Seifert says SOME of clubs pushing for Euro Super League are “poorly managed, cash-burning machines” that have lost millions during decade of growth. “If I was an investor, I’d ask if they’re the right partners.”

Seifert claimed that some of those clubs were “poorly managed, cash-burning machines” and that have lost millions during decade of growth.

He added: “If I was an investor, I’d ask if they’re the right partners.

“In the end they will burn this money, like that they burned in the last few years. They should think about developing a sustainable business model, salary caps.”

Madrid supremo Perez once more voiced his support for a new competition in December, the latest in his long line of support for the creation of a new European elite league.

Three Spanish clubs – said to be Madrid, Barca and Atletico Madrid – would be among the 15 founding clubs in the competition, alongside six from England, three from Italy, two from Germany and one from France.

It is planned that either 16 or 18 teams will participate in the competition, which plans to get underway in 2022 and will be funded by JP Morgan bank, as per a report earlier last year in Diario AS.