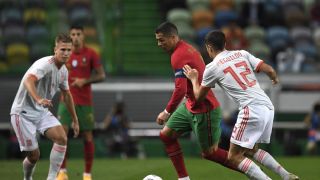 There remains a degree of uncertainty surrounding this summer’s European Championships due to the Covid-19 pandemic, but nations involved are continuing their preparations for the tournament.

Chief among them are Spain, who on Thursday confirmed they would be taking on Iberian rivals Portugal in a friendly match ahead of the tournament.

Spain recently played out a scoreless draw against Portugal in October in another friendly encounter while the sides memorably played out a 3-3 classic in the 2018 World Cup.

The game will take place in Seville’s La Cartuja stadium – the venue for this month’s Spanish Supercopa final and also where La Roja hammered Germany 6-0 in their Nations League clash back in November.

The game will be staged on 4 June with a local kick-off time of 7:30pm – ahead of Luis Enrique’s side commencing the tournament against Sweden.

As reported by Marca, the Spanish FA still plan to schedule one more friendly match ahead of the tournament getting underway in June to allow the nation to have full preparation ahead of their opening game on 14 June.