Slowly but surely, Antoine Griezmann is connecting with Lionel Messi for Barcelona

Barcelona under Ronald Koeman is an unusual animal. Far from the usual standards of a Barcelona team, it’s tempting to write the team off. But there has been green shoots, like the emergence of Antoine Griezmann as a key member of the attack. 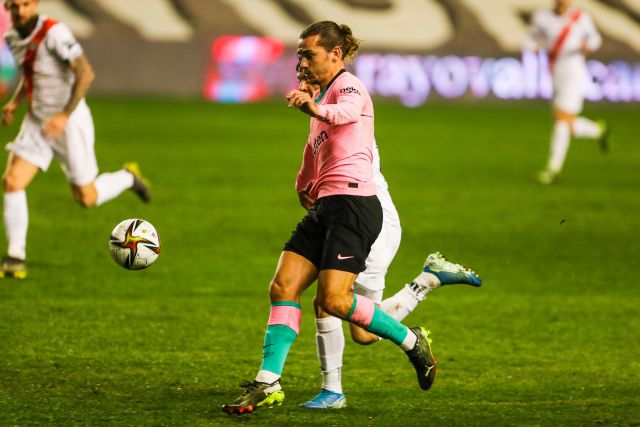 The Frenchman has endured a difficult start to his Barcelona career but he’s slowly but surely building a strong relationship with Lionel Messi on the pitch as per Diario Sport, evidenced in last night’s Copa del Rey victory over Rayo Vallecano when he assisted the Argentine for the blaugrana’s equaliser.

It was the third assist Griezmann has provided for Messi this season, and marks his shift from jostling to take centre-stage to understanding he’s a role player and that the Argentine is the undisputed main show. The other set-ups he’s provided for Messi has been in recent weeks, at Athletic Bilbao and Granada.

Antoine Griezmann is often an easy target and a figure of fun, but I think aside from some of the questionable calls he's made he's a genuinely decent fella. Just look at how happy he is for Ansu Fati and Riqui Puig in these photos. pic.twitter.com/oBydmCYNY0

Griezmann has six assists to his name in total so far this season, with the other three for the benefit of Philippe Coutinho, Ousmane Dembele and Frenkie de Jong. The Frenchman isn’t the star of Koeman’s Barcelona but he is becoming an important part.