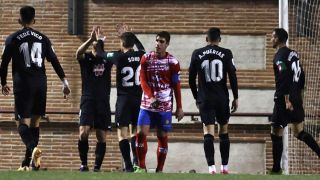 Last season saw Granada qualify for the Copa del Rey semi finals for the first time in their history before being edged out in the last four by Athletic Club Bilbao.

Diego Martinez’s side are on course for a similar achievement this time round and they cruised into the quarter finals of this year’s competition with a six-goal demolition of Navalcarnero.

Based near the Spanish capital Madrid, Segunda B outfit Navalcarnero had already pulled off two cup upsets by defeating Las Palmas and top-flight Eibar in this season’s Copa, but Granada proved far too strong.

German Sanchez, Albert Soro, Fede Vico, Roberto Soldado, Dimitri Foulquier and Jorge Molina were all on target for Granada as they eased into the final eight.

They join Andalusian neighbours Real Betis, Sevilla and Almeria in the quarters, while Barcelona, Villarreal and Levante have also qualified, alongside the winners of Alcoyano against Athletic Club Bilbao.