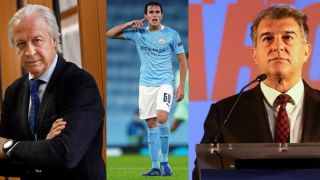 There’s still a month to go until the Barcelona presidential elections and, according to Diario AS, things are beginning to heat up just a little bit.

Chairman of the managing committee currently in charge of the club, Carles Tusquets, has this week sent a harsh message to the favourite for the presidency, Joan Laporta, about the pressure he’s applying regarding the signing of Eric Garcia.

“I beg you to refrain from treating the managing commission in the search for decisions that you consider may be convenient for you under the guise of being necessary for the club,” began the letter sent by Tusquets to Laporta.

Tusquets was responding to an earlier letter from Laporta, where the candidate wrote: “I want to remind you that a negligent, obstructionist and malicious attitude, being chairman of the managing committee, would lead to you being held directly responsible for the club’s financial situation.”

The controversy relates to the signing of Garcia, a young Manchester City centre-back who left Barcelona for the English side in 2017. His contract expires this coming summer and Barcelona had been close to securing a pre-contract agreement for him, maybe even brokering a deal to bring him in for a cut-price fee this January transfer window.

The three candidates, however, for the race due to culminate on 7 March, were unable to agree consensus about whether to bring him in now or not. Tusquets, Ronald Koeman and Victor Font are in favour, Toni Freixa is neutral and Laporta is against.

Tusquets didn’t like the tone of Laporta’s letter. “If we finally don’t sign the contact, it will not be because of unfair and inconsiderate threats, but rather as a sign of responsibility and elegance, allowing the elected president to make the pertinent decision,” he wrote, explaining that his opinion was that the deal made sense from a sporting perspective.

Tusquets ends the letter with the harsh judgement that Laporta needs to learn how “to put the interests of Barcelona before his electoral interests.”