The big Barcelona news on Tuesday sees Lionel Messi return from his two-match suspension to be available for their midweek Copa del Rey trip to Rayo Vallecano.

The Argentine received the first red card of his club career in the Spanish Supercopa defeat to Athletic Bilbao and subsequently was forced to sit out the victories over Cornella and Elche respectively.

Now he is back in the first-team squad and could feature against Segunda outfit Rayo, with Diario Sport outlining his incredible record against the Madrid-based side.

Messi has played 10 games against Rayo – winning all 10 matches – while scoring a remarkable 17 goals, a rate of 1.7 strikes per match. 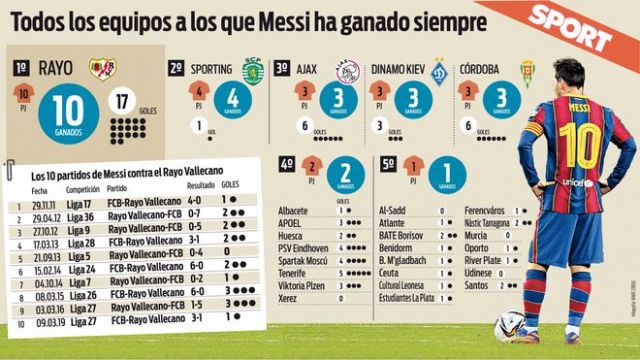 Two of those games have seen Messi net hat-tricks, he has scored four goals on one occasion and has also struck a double.

Nine of the 33-year-old’s goals were at Camp Nou with eight in Vallecas.