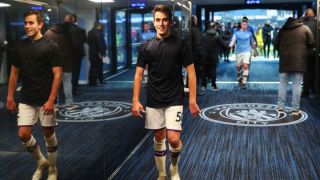 In a survey carried out by 420 Barcelona members over the age of 18 by Time Consultants for Mundo Deportivo and carried in a report in Diario AS, one of the most interesting queries answered was regarding transfer activity.

Garcia joined Pep Guardiola‘s Manchester City in 2017 after coming through at La Masia, but his contract expires in the summer and he wants to return to Barcelona.

Depay’s contract also expires in the summer, and he’s said to be keen to leave Lyon to come to the Blaugrana and rejoin his old Dutch boss Ronald Koeman at Camp Nou.

The survey also revealed that Joan Laporta is the clear favourite for the upcoming presidential elections. He earned 55.2% of the pollers’ vote, ahead of Victor Font, who earned 16.4% and Toni Freixa, who earned 6.2%. 9.3% are undecided and 8.3% of those surveyed have no intention of voting.